Something under the ivy....

November 07, 2019
I was clearing out my carriage house/shop/garage where you can't get a car into....last week.

About a week before I found a bunch of flies circling around and landing on, something. I thought it was pooh. Uh, no it was not.

It was a dead cat. I thought. Oh no...I hadn't seen the kitty who lived somewhere next door for a while. ugh. I know that animals sometimes find a place to die...and just....die.

That cat didn't like to get close to me... that was for sure...but it was always hanging around our yard. But it was a bit skittish.

I let the 'cat' stay there for at least 3 days....and this past weekend, I decided to face my fears.. and also the flies that were buzzing and hovering around. Those were even grosser. 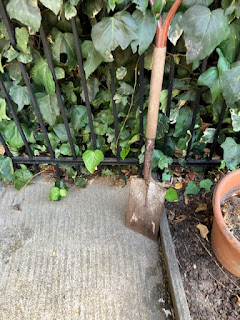 Now, what if it's really dead? Who do I call? And I don't want to dump it into any of the gray, blue, or green bins.

I found a smallish shovel in the carriage house. I also found a small plastic garbage pail (from the garbage company), that I was supposed to leave on the porch or even in the kitchen, to collect the food scraps and then take it out to the green bin. (That didn't really work for me...I use the Bio-Bags, instead.)

Ah-ha! I decided to call the Animal Shelter (the pound). A woman picked up, I told her what I thought it could be, and would she take it? Yes. Whew. I didn't even know where the shelter was! Thank goodness for the 'Ms. Lady' in my car, who told me exactly how to get to the shelter.

I took the shovel and was able, after 3 attempts, to pick it up. And it was definitely not a cat. I still don't know what it was. It was multi-colored (like a calico cat), was fat but full of flies, and it had a furless, long tail like a whip. And it fit into the pail, twisted into a deflated ball.

OMG...the shelter was full of happy, howling dogs, and lots of folks looking to adopt a pet. That was not me. And none of the workers could identify what 'it' was. One very nice man said he'd take the animal from me. He asked if I wanted the pail back. Uh, no thank you. He also had no idea what it was.

This was a real motivator for me. I took my car to Mirror Finish, to get it detailed today. I took a Lyft back home (not a very friendly guy) and Lyft back to the detailer (a more friendly woman).

Good news...I didn't have to call a neighbor to do this for me. Good news, I did it myself...and I wouldn't have wanted a neighbor to go through that ordeal (for me).