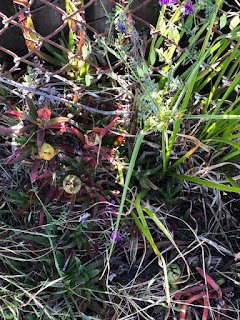 There's a 1950's (?) apartment building next door (not pretty)...but it's attached to a gorgeous Victorian, next door. We're separated by a 20+-foot wall of ivy. There's a regular turnover there, within those units, but..I don't know how often. One of the neighbors is a woman and her son. For decades I've watched him pull out aluminum cans from the blue bin, on our driveway. I used to discourage him from doing this. Several years ago, I just gave up. Not sure how much English the son speaks, and I don't know if I'd recognize the mother. What caused the change in my mind? Why did it even matter to me? But every time I see him he says hello in this way "Have a good day." And every time I see him leave he says "Have a good day." Same tone...every time. There are items that take more importance. But for this man....he's doing his part making a living with his mother. Live richly, marilyn
Post a Comment
Read more
More posts