Sing It Yourself Messiah

January 01, 2020
On Saturday, December 14, I was running errands and drove by the Christ Episcopal Church...and it was their turn to sponsor a public sing-along with vocalists, a small chamber orchestra, and a narrator, of Handal's Messiah. I decided to attend that event. It turns out there are numerous churches in town that rotate the hosting of this event on a yearly basis. Who knew? I obviously did not.

I rode my bike over there just before 4pm. I am definitely not a musician, and I can tell when the notes go up and down, and have the ability to do some by-ear harmonization. I was greeted by some members who offered me a huge, very old paperback book, maybe 60+ pages, that contained the music and words, of that symphony.

I sat towards the back of the church. And after the introduction of the presenters, the magic began.

For the life of me, I couldn't figure out where they were in the music...and I finally told myself: sit down, enjoy it, watch the others belt out the Messiah. I could at least hum along.

The voices in the sanctuary were amazing! Regular folks...with extra-special voices, were making the most of the moments. When I gave up trying to follow the music, all was well.

It was like in the movies...simple folks belting out notes, in harmony, and then getting back to whatever they were doing before they came into the church.

Less than 2 weeks later, I was talking with friends in Napa. We were at a party for Christmas Day. This involved the huge extended family my daughter-in-law has in Napa. It is always fun, interesting, and fascinating. Rob and Beth are both very talented musicians. And they are part of that mega family. 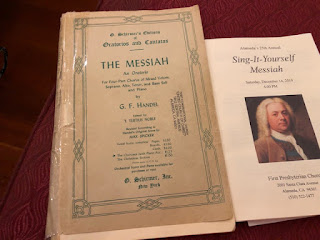 I told him I went to the Sing-It-Yourself Messiah, for my first time. Rob started telling me his experiences with the sing-along Messiah. And what he's done, over the years. I was truly impressed...not just with his knowledge, but how many years he's been doing it and with such impressive orchestras.

The hosts only asked for a donation and never mentioned how much. I dropped $20 into the box that was acccepting the donations. It was the best money I spent all season.

I guess I've actually grown up. And I'll be back for more next year.