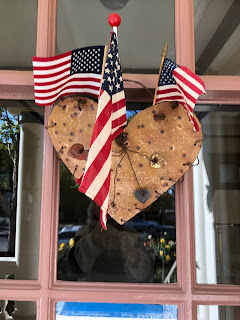 I'm not known as a flag-waver, but I do love what our flag stands for...and this is how I celebrate Independence Day: decorating our front porch.

When I was in high school, I stood when we pledged allegiance to our flag, but I never said a word. The Vietnam war going full blast, and we heard so much about how many soldiers were killed in that war. It was awful and nobody could explain to me why the US was there.

It's a bit like the vicious virus of today: getting numbers of how many folks have been tested, or are hospitalized, or have died, on a daily basis.

I put the big flag on support near my front door, so it really waves in the wind.

I also have an American flag that's very old that has 12 stars in a circle with the stars and stripes. But it's heavy-duty and I don't know who gave it to me or where I found it...must have been in an old house, in a basement or in an attic in a corner where nobody looked. 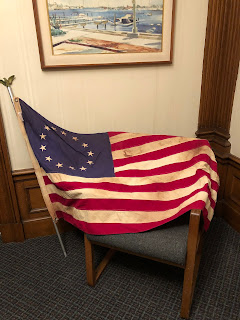 Google told me that it's a Betsy Ross Flag.

The Betsy Ross flag is an early design of the flag of the United States, named for early American upholsterer and flag maker Betsy Ross.[1]:107 The pattern of the Betsy Ross flag is 13 alternating red-and-white stripes with stars in a field of blue in the upper left corner canton. Its distinguishing feature is thirteen 5-pointed stars arranged in a circle representing the 13 colonies that fought for their independence during The American Revolutionary War. 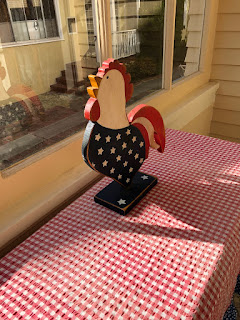 And who wouldn't want a rooster that's painted like an American flag, standing on a red and white table cloth with white stars on a blue background, around the edges?

You can be sure that I'll be wondering how we went so backwards over the decades...and only now, after George Floyd's death are many of us waking up to what we've been doing to other people.