Mobile working and baking and cooking.

KQED (National Public Radio) is where I get my news most days, and I usually enjoy the programs that they offer. If I don't, then I'll set my Sonos to any musical group that I love.

And because I'm by myself...I'll often sing along with The Beach Boys, The Beatles, Billy Joel, or Bette Midler. (I just realized that these performers all have "B's" in their names. That's weird.)

However, the other day, when I was listening to KQED the announcer was talking about a traffic jam.

He said, "This is mobile working. There is office furniture on the freeway." Deadpan.

I thought it was hilarious...enough that I wrote it down in my  NOTES on my phone. I still think it's hilarious!

I get some pleasure from the email updates that I get from Food.com. The photos look great...but it's kind of exhausting reading the recipes because I know that my food never looks like the photos.

However, baking, (when I'm in the mood), has its calming ways for me. In fact, I shared a recipe with a colleague today that featured 'fake' and 'no-bake' Reeses Peanut Butter Cups. But it doesn't require that you buy the candy. The recipe calls for confectioners (powdered) sugar, chocolate chips, graham crackers, butter, and peanut butter (Jif or Skippy).

And because I have an abundance of lemons from my lemon bush/tree, I've found a recipe for Lemon Bread/Cake that turns out just fine. 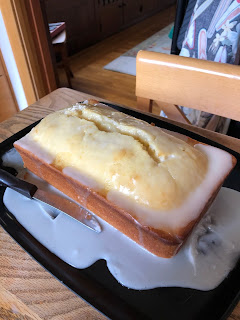 Oh, and I have a recipe for corn on the cob...that doesn't involve grilling or frying or baking.  Fill a large pot with water, and once the water is boiling, add milk and butter to the water and then the corn...and turn down the heat. Let it cook for about 6-8 minutes and it's wonderful. Plus you can keep it in the refrig and then heat it up in the microwave.

When I make a Panzanella Salad (fruit, nuts, cheese, tomatoes, and anything extra I have in the refrig) I add some cooked (cold) corn right off the cob.

If you'd like the recipes, let me know and I'll send them to you.