I've always wondered where the orange cone on my side yard came from.....

...and on Wednesday I found out.

I was taking photos of a bathroom in one of my tenant's apartments. The purpose was to send the photos to the vendor who would be making the tub look new. With the photos, he would be able to give me a bid for refreshing that tub.

As we were talking, she was telling me about how angry she got when a neighbor (a contractor), who used to live on the corner would put two cones out to save a parking space on the street for his large truck.

Parking can be tough around here.

My tenant decided she'd had enough. One day, once he drove off, she went over and took the cones. She was pissed off.

My question to her was 'where did you put them?' She said she threw them on the side of the house!

Well, I was on that side of the house, preparing for the rain, last week. I saw only one cone. But I finally knew where it came from!

Now, I have 3 orange cones - one on the side of my house and 2 in the carriage house.

Be safe, and don't hog the parking spaces on our street!

P.S. Like the Winnie the Pooh book, it was a blustery day on the Bay about a week ago. 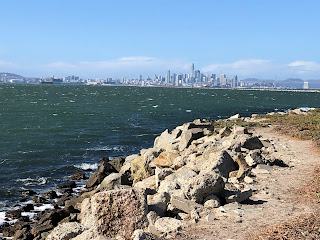