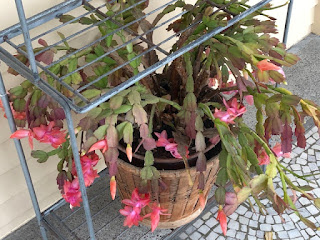 Now…it’s just me because the kids aren’t interested.So once again…I am forced to think about what went wrong, what went right, and then decide if it’s worthy to be included on this list.
And the survey says, (and some of these are the same answers as in previous years):
What’s the most fun you’ve had this past year?  Fun is now a very relative term. I appreciate silence. Silence allows me to listen to what's going on and if I don't like it, I stop it. I found a new place to read....along the estuary shoreline, across from Oakland where the huge container ships load and offload. It's where the SF-Alameda Ferry runs. It's fascinating.
What’s the weirdest place you’ve been this past year? On Interstate 5, driving from San Diego to Lodi. CA is a big state...and so varied.
What’s the biggest personal accomplishment you’ve had this past year? Realizing that change is only as big as I make it.And I wonder if I make too much of small changes.Really radical changes can be something …
Post a Comment
Read more
More posts