Yummy-ness and the Oakland Speaker Series. 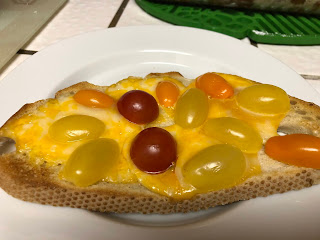 So speaking of talking, I was talking with a friend and I quickly thought about what this pandemic has been teaching me:

It's about the truth and trust.

Not out of distrust,

We obey the rules

Because they work for all of us.

Now...to the open-faced sandwich pictured above. When I was in 5th and 6th grade in San Rafael,  I had a friend named Debbie. I don't remember her last name.

I also don't know anything about how the pandemic has affected what you remember, but for some reason, I have these flashbacks to days going way back.  This 'culinary' event was one of those flashbacks.  Back then I called the cheese, tomato, and sourdough bread a 'Debbie's Special.'

Today, the cheese I use is a blend of cheddar and mozzarella. And I buy it in a block. Next, I add some tomatoes on top of the cheese.

I broil it until it gets bubbly. Then I take it out of the broiler and put it on a plate. Then I add several drops of Worchester sauce on top of it.

In the last week, I've made the 'Debbie's Special' twice, for dinner.  It's literally been decades since I've had it. It's pretty yummy, to me.

Several of us have had season tickets to the MPSF Speakers Series. We've had these tickets from way-back, when Carl was still with us. A group of us would park our cars near a Chinese restaurant where we'd have dinner. It was really good.

Then we'd walk over to the Oakland Paramount Theatre, and grab the cheap seats way up in the balcony. The rich people sat in reserved seats on the lower level.

This year (and I hope forever) it is held virtually, i.e. on Zoom. They've done a remarkable job of hosting these events online.

Tonight the speaker was Rick Steves. He's the guy on the PBS (channel 9), in my area, who travels around the world (back when traveling was done). What a fountain of knowledge he is, and somebody who talks with you, not at you.

That's it. Live richly. You deserve it!