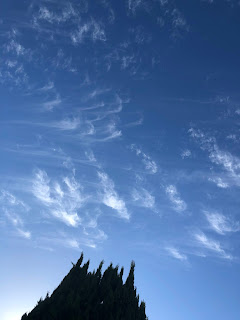 More clouds late afternoon, Thursday.
My roof didn't catch on fire (thank goodness), but the fireworks were going a bit crazy around the 'hood on the evening/night of the most recent 4th of July.
I really feel sorry for the cats that live nearby. They must hide somewhere (maybe in my yard....like they do when they're sleeping during the day).
It was non-stop with the solo BANGS and the firecrackers. Yes, I do like colorful sparklers but they don't make any loud noise.
Last week, I was talking to my friend while we were sitting on my front porch, jawing around. I was trying to remember where I was when I smelled some type of fireworks on July 5th. It was smoldering.
Then a couple of days ago, I realized where I was. We lived on Janis Circle, corner of Pearl St. I believe that Carl was on a Transpac Race to Hawaii. I was walking around the side yard, front yard, back yard, sniffing to find out what the smoldering smell was coming from. That went on for at least one full day, maybe two.
And then I found it....it was a firecracker, that landed closed to a bush (but not in it), and yes, it was smoldering.
My mother-in-law owned the property and she lived in Newport Beach. Carl and I lived in one unit, with our two kids.
Our tenant (a divorced man) lived in the other unit. Then, thinking back, he stayed in that unit, even though we took his upstairs bedroom away from him! We created a 3 bedroom, 2 bath unit, for us, and we turned his unit into a studio. (yes, with city permits). It worked great! And he was more than happy to give that bedroom up...and not have to move.
The other items that were interesting were: he had 2 kids that lived with his ex-wife nearby, and he flew a Cessna 150 airplane. He would invite me to fly with him. He had a CFI (Certified Flight Instructor) license. He kept his plane at the Oakland North Field in a hangar. I was a CFI with a Glider Pilot license, working to get a Commerical Pilot's (single-engine land) license and then a CFI (airplane) license.
The Cessna 150 is a two-seat tricycle gear general aviation airplane that was designed for flight training, touring and personal use. In 1977 it was succeeded in production by the Cessna 152, a minor modification to the original design. Wikipedia
Top speed: 124 mph
Range: 350 mi
Cruise speed: 122 mph
Weight: 985.5 lbs
Unit cost: 12,000–25,000 USD (2007)
Engine type: Flat-four engine
And wouldn't you know it, I just heard some fireworks going off @ 11:15pm tonight. argh.
Back to the present...all is well, and I tell folks if I complain you have the right to shoot me. So far, I haven't seen any guns, bullets, and I DON'T COMPLAIN!
Live richly, marilyn