When I least expect the unexpected, it always shows up...

I was picking up some friends at the Oakland airport....at the General Aviation Terminal. They stopped to have lunch with me before they continued their flight, since their main destination was in Southern CA, to see their extended family.

Low and behold, the Blue Angels were there, having recently landed close to the GA Terminal. They even park their planes impeccably. There was a small group of folks that had turned out to see them. But because of the chained-link fence and the inverted wire above that, there was no way to get any closer. But I did take a photo of the jets. 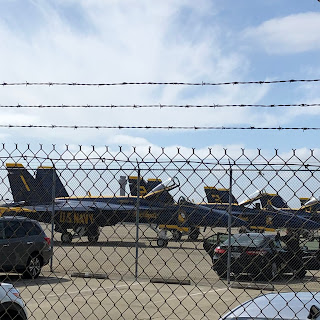 The next day, they were giving the Bay Area an airshow that was remarkable. But I was a bit busy, and while I have watched them from the Alameda shoreline in previous years, that didn't happen that day. But I could hear them!

I turned on my TV and there they were, being filmed by multiple cameras, in the sky, doing what they do best, along with a description of what they were doing.

It was perfect timing, because we (I) were able to hear what they said and watch them perform flawlessly. I believe that one of those Blue Angels was a woman.